We have over 2 decades of experience performing pest control for the residents of Houston Texas and surrounding areas. View a few testimonials from our happy customers.

We knew we had a flea problem and we were using all different kinds of flea sprays. But they kept coming back and it seemed like we could never get rid of them. We finally called a friend’s referral, Gulf Coast Exterminators. They took care of the problem and they visit every 3 months to keep us flea free. Thanks!

I am very happy with Gulf Coast Exterminators because they treated my home for fleas and that was the end of the fleas. Plus I have them visiting every three months for the other bugs. Thanks!

Recently I called Gulf Coast Exterminators to help with a new flea infestation. They were very helpful with tips and suggestions on how to avoid problems in the future. I am very happy with their service and price.

This company has always given me good service. Never a problem and always very courteious. I reccomend them to anyone who needs pest control in Houston.

Wow, I never realized how many honeybees could live inside the siding of my home. When I saw 20 or 30 bees flying around an opening near my outside siding and fireplace I called this company. I was shocked to realize that they had to remove some of the siding to get to the bee’s hive and honey. There were 5 honey combs and they said more than 20,000 bees. Thankfully it is all gone and I can rest again.

Very satisfied with the pest control service from this company. I have been using them for over one year and they are always punctual.

I am happy with the work by Gulf Coast. They are always prompt and very courteous. And I don’t have any bug problems.

I have a property in north Houston and recently realized that their was a bee hive in the walls. I didn’t want to try this one by myself even though I am a handy man. So I called Gulf Coast Exterminators and they did a great job taking care of the bees and finding the hive. I didn’t get stung once and that was part of the victory. Thanks Gulf Coast.

I had a couple of possums in the attic and called Gulf Coast to help me with the problem. Jonathan was very informative and he showed me exactly where they were entering. I am now possum-free and very thankful for the expert pest control.

This winter we knew we had some type of animal in our attic so we called Gulf Coast Exterminators because I liked their website. Well, they set up a couple of traps and caught two rats. Then they showed me where they were entering the attic and closed the entrances. Thank you very much for your help.

This company is good and they seem to have good people. I had to wait for almost two weeks for a visit. I just thought if they are so busy why don’t they hire more people. Just a suggestion. But the work is good if you are willing to wait.

I switched from a national outfit to Gulf Coast Exterminators because of the better pricing. I think the services are basically equal but Gulf Coast doesn’t have a big national advertising budget to support. So I’m saving some money and pleased with their service.

Our serviceman took the time to answer all of our questions and explain the exact application procedures for exterminating the ants and roaches in our home. He also told us what to expect in the coming days and weeks. We are very happy with our pest control service from Gulf Coast.

With 3 dogs and 4 cats we were losing the flea battle. So we called Gulf Coast and they explained how we can minimize the problem. I feel much more comfortable knowing that they will be visiting every quarter for flea control treatments.

I can not stand roaches and when we moved into our home in the Sugar Land area we called an exterminator immediately. Actually my husband called Gulf Coast Exterminators and they were there that afternoon. I certainly did not expect service that quickly. They took care of the roach control problem and that sold me. Now they visit every quarter and that makes me happy.

Leave it to the Pros

When I read an internet article that said homeowners were the worse offenders of over-applying poisons and pesticides in the environment I realized I was one of them. That was the day I asked my neighbor for a recommendation and called Gulf Coast Exterminators. Now I don’t have to worry and my home is bug free. Thanks Gulf Coast, you are the best pest control company in Houston.

Gulf Coast Exterminators has over FIFTY 5-star reviews across the internet. 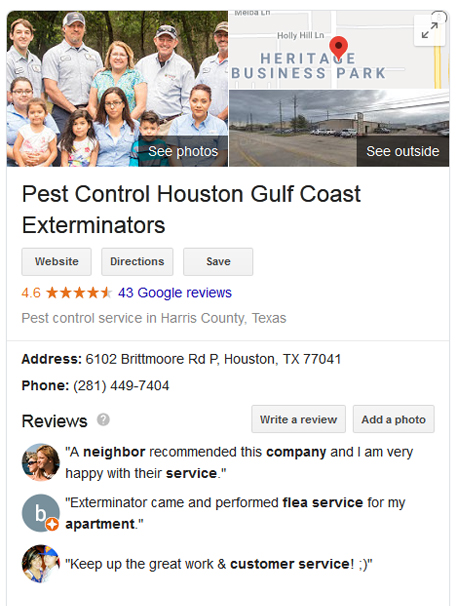 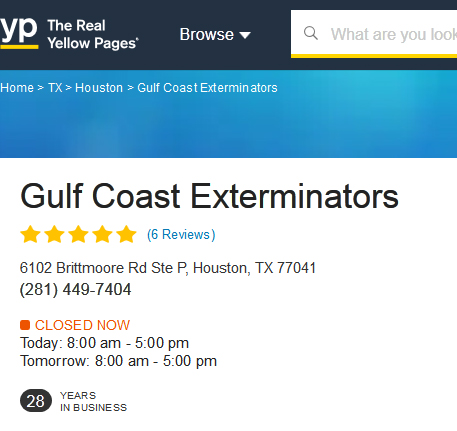 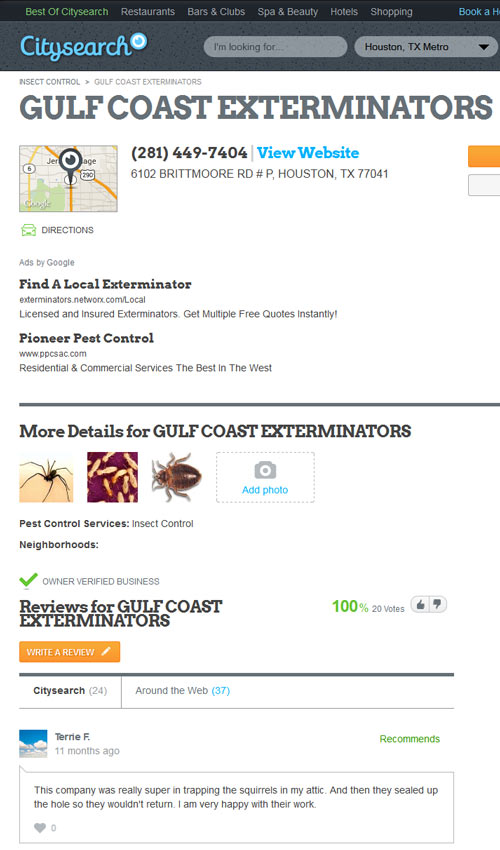