Get Affordable and Effective Houston Bat Removal from Pest Control Houston company Gulf Coast Exterminators. Help is a call away: (281) 449-7404.

Pricing Disclaimer for our Pest Control & Animal Control Services: Pricing is fair and affordable but cannot be guessed over the phone. A licensed technician will inspect your home or work place before offering pricing or a treatment plan. Call the office to schedule your FREE Inspection and quote.

Bat Removal in Houston Texas (and surrounding areas) is one of Gulf Coast Exterminators many specialties and expertise. 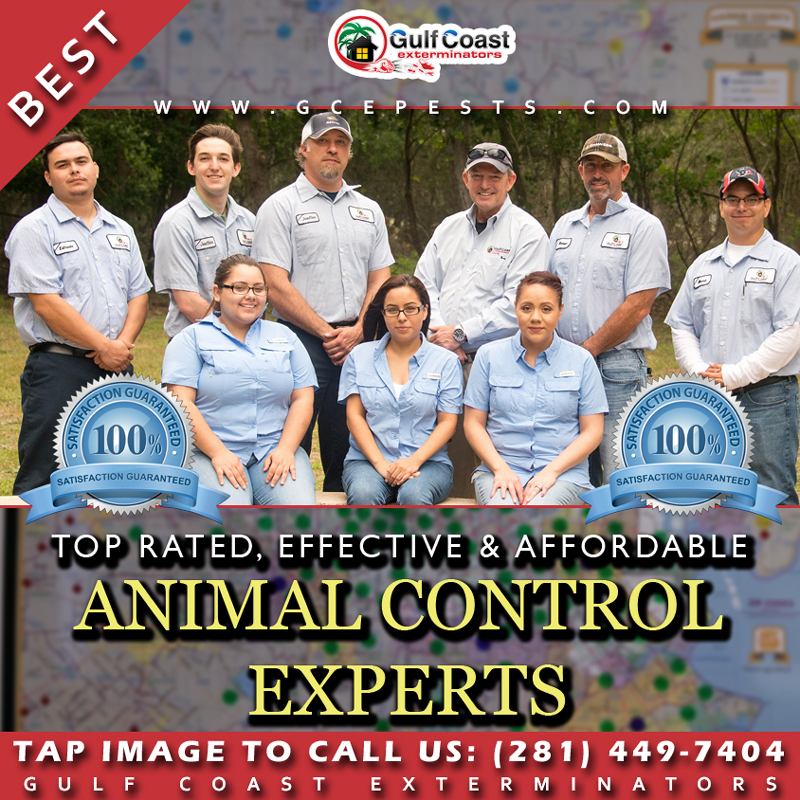 Bats are a popular Houston pest Gulf Coast Exterminators gets service calls for. Call us today at (281) 449-7404 and let us help solve your Bat problem with our successful & affordable Bat Removal services.

When bats roost in a natural environment they are not generally considered a pest. They’re actually an important ally in the war against mosquitos and other flying insects in the Greater Houston area.

Bats will take flight as individuals or in large swarms near dusk and spend the entire night consuming thousands of insects before returning in the early morning hours just before daylight. The vast majority of these insects are mosquitos and thus a beneficial relationship between bats and mankind is established.

Some species of bats in our area can live as long as 25 to 30 years but they don’t tend to have many offspring each year. Almost all species have a single live birth per year.

Problems arise with bats when they find their way into a manmade structure suitable to support a roost. This can produce unsettling noises, foul odors from the droppings and even disease.

In our area bats will bear live young in March through April and care for them until they are able to fly. Young bats are usually able to fly within 6 to 8 weeks of birth.

While males & females tend to roost separately they may congregate prior to a seasonal migration to Mexico or further south in late September or October. Others will simply hibernate for the winter only to emerge once warm temperatures bring about a large enough insect population to support their nightly flights.

Due to books, movies and myths over the last 100 years the poor little mammals tend to conjure evil images in the minds of many a homeowner. While there is a great deal of misinformation about the bat there are some reasons to not want them residing in your home even if it’s in an attic, chimney or eve where you don’t often see them.

* Remember to never handle a bat, dead or alive! While it is unlikely, even dead bats can transmit diseases such as rabies and are not safe without protective measures. The dust from bat droppings can release fungal spores into the air making you a target from an infection such as Histoplasmosis.

If you are accidentally bitten or scratched while handling a bat, make sure you save the mammal for examination and contact a medical care specialist immediately. Wash the bite with soap and water, and seek professional medical care at once.

Non-bite exposures should be treated with the same level of caution as a bite.

Gulf Coast Exterminators performs exclusions on apartment buildings, personal residences, office buildings, parking garages and warehouses when the need arises. Our techniques vary widely depending on the architecture of the structure and the level of infestation.

An exclusion job with bats can be tricky because of the heights of their chosen entry points on some structures. Another factor to consider when performing bat exclusions is the size of the openings used by bats.

The untrained professional won’t seal off many of the openings accessible by bats thus ensuring failure at the completion of the job. We’ll discuss your problem in person to learn as much as we can first and then examine the property in detail to locate entry points you may have missed.

A small job may simply call for an excluder (one way chute) to allow the bat an escape route while temporarily preventing reentry to the structure. When this system is employed the excluder needs to be removed and the opening sealed.

The excluder should be left in place for about 3 to 5 days allowing all the bats to exit the structure. It’s important to immediately seal the opening where the excluder is removed or you’ll have bats re-infesting the structure sooner than you want.

Other jobs may require specialized netting be installed to actually trap the bats and subsequently adding building materials to permanently prevent the reentry of bats.

Bat Exclusion work is labor intensive and requires attention to detail on every job.

For this reason the cost of each job is quoted only after a thorough inspection is performed to determine the number of man hours, materials and equipment needed to successfully complete a job to our client’s satisfaction.

If they can’t fly they’ll soon perish without the care of adults and you’ll be upset with the odor of decomposing bats in your structure. Besides it’s inhumane to simply allow the immature bats to die while untended.

If we can we’ll simply wait a few weeks until they’ve learned to fly. At that point we can perform the exclusion described above and allow the population to relocate to a natural habitat.

On occasion a young bat will become disoriented and enter the actual living or work space of a structure. When this happens the bat must be removed immediately.

Our technicians possess the experience, training and tools to safely capture a bat and release it back into the wild.

Your best course of action is to seal off the bat into a single room if you can.

Sudden movements will only serve to frighten the bat causing it to hide. I know what you’re thinking, but the bat is just as frightened as you.

Maybe more so! So, if you can seal the bat off in a room by closing doors as you exit and place a rolled up towel at the base of the door to prevent it from escaping the room it will make our technicians job much easier once he arrives.

Working with bats is not something all PCO’s are comfortable handling.

We pride ourselves on our ability to rid your home or building safely, humanely and efficiently.

Gulf Coast Exterminators can help save you money and stress so call us today at (281) 449-7404 for a free estimate on your bat problems.