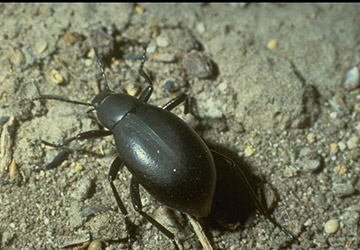 Beetles come from the order Coleoptera, the largest grouping of insects. The front wings of a beetle are often hard and appear more like a shell; a beetle folds its front wings to cover the back ones.

They come in many shapes, sizes and colors. Some, like click beetles, are long and slender while others, like June beetles, are oval. They develop in a four-stage life cycle known as complete metamorphosis: egg, larva, pupa and adult.

Their lifespan varies according to species. For instance, wood-boring beetles may take up to several decades to develop from an egg to adult insect. The amount of food available for the larvae to eat in addition to environmental conditions also affects life span.

Beetles feed on many types of plant and animal materials.

Adults lay their eggs near the food larvae will consume when they hatch.

Other species, like powderpost beetles, feed on hardwoods and bamboo. They attack furniture and other items constructed of wood. Some species, like flour and grain beetles, target food products in homes. They can also damage food in production facilities and stores.

Other types damage lawns and landscapes.

Sometimes beetles become nuisances in late summer and fall; homeowners can find hundreds of these pests clustered on the outside of the home, trying to find shelter or escape inclement conditions.

Beetles are a popular Houston pest we get service calls for. Call us today at (281) 449-7404 and let Gulf Coast Exterminators help you with your Beetle problem.

Beetle Control is one of Gulf Coast Exterminators many pest control houston specialties and expertise.