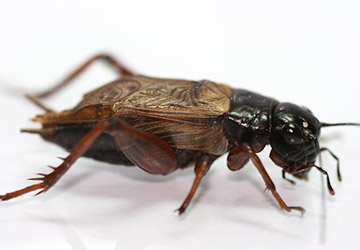 Cricket sizes and appearance differ according to species, but most have long thin antennae and large jumping hind legs.

They have different chirping “songs” for attracting a mate, fighting, or warning.

Sound is created when crickets rub their forewings against each other.

Likely signs of crickets are sightings of the pests themselves or songs the species sings.

Crickets prefer damp conditions and are active at night; some are attracted to lights.

Crickets are omnivorous scavengers and renew soil by breaking down plant materials.

They can be destructive in the presence of agricultural communities, as they feed on seedlings and crops.

A cricket’s wings cover at least half of the abdomen; some species are wingless. Females have a long ovipositor in the rear, which is used to lay eggs in the soil. Young crickets resemble adults; however, their wings are much smaller.

They complete a steady transformation from egg to nymph and then adulthood.

Crickets can be found beneath rocks and logs. They are considered to be occasional invaders of homes or other buildings. If the weather becomes inclement, or they accidently hop through an open door or window you may find yourself woken up by incessant chirping.

Because crickets are attracted to warmth, you may find them in the kitchen, or near the furnace or water heater. Once inside, they are likely to burrow into cracks and behind baseboards.

There are precautions you can take to prevent crickets from entering your home:

Crickets are a popular Houston pest we get service calls for. Call us today at (281) 449-7404 and let Gulf Coast Exterminators help you with your Cricket problem.

Cricket Control is one of Gulf Coast Exterminators many pest control houston specialties and expertise.