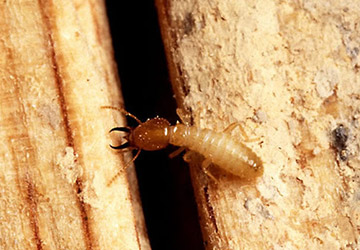 Think of a Formosan Termite as a subterranean termite on steroids.

This termite is more aggressive and supports much larger colonies (up to and exceeding 1 million workers). Additionally this termite can separate the colony from the ground by building a carton within the structure allowing it to absorb the moisture from the surrounding atmosphere rendering traditional trenching and rodding methods ineffective. They may also swarm at night and later in the summer.

SIGNS OF AN INFESTATION

Termite Swarm: After 2 to 4 years a subterranean termite colony may be mature enough to produce "swarmers" (winged primary reproductives). These termite "swarmers" leave the colony in large numbers during the spring and early summer months. Swarming may occur in the Houston area at any time of the year due to certain environmental conditions. The traditional season for us however is generally April through June and may be preceeded by a morning rain with light winds. The number of "swarmers" produced is proportional to the age and size of the colony.
If this should occur, while it can be intimidating to a property owner we simply suggest collecting a few for our technicians to positively identify and then vacuum the rest. The action of the vacuum will likely kill them and you can dispose of the remaining "swarmers" into a trash bag.

Termite Mud: When termites have successfully entered a structure they begin consuming wood (cellulose) for their nurishment and that of the queen and juveniles. They will eat and tunnel through framing members, trim work, door casings, wood flooring, cabinets, carpet fibers (if natural fibers), sheetrock paper, wall paper, newspaper, books, linens and anything else you can think of with natural cellulose. When in search of additional food they know virtually no boundary.

Cracking/Crumbling Paint: This could be a sign of tunneling activity described above and should be examined by a trained professional. Termites may actually penetrate the skin of your enamel paint on trim work. Don’t take a chance thinking it’s just a bad paint job or defective wood – get it checked today!

Pellets: Note that these are only produced by Drywood Termites! They are excrement pellets and are approximately 1/32" long, rather blount on one end and pointed on the other. The pellets will have a similar color to the wood the Drywood Termites have been consuming.

Formosan Termites are a popular Houston pest we get service calls for. Call us today at (281) 449-7404 and let Gulf Coast Exterminators help you with your Formosan Termite problem.

Formosan Termite Control is one of Gulf Coast Exterminators many pest control houston specialties and expertise.